Jane is a first-class advocate who prosecutes and defends in all areas of serious crime. She has been instructed in complex fraud and financial crime, and has particular expertise in sexual offences.

As a criminal barrister, Jane owes her reputation to her abilities in cross-examination, particularly of children and vulnerable witnesses; to the way she builds trust with clients, the judiciary and juries; her methodical preparation; and her feel for the tactics of a case.

Prosecuting, she is regularly instructed by the Hertfordshire, Bedfordshire and Cambridgeshire Major Crime Unit, to prosecute murders and complex crime on the borders of the Metropolitan area.

Defending, she is regularly instructed privately by both professional and high-profile defendants. Her expertise in sexual offences has seen her appear for the defence in a number of high-profile and complex historical allegations.

She regularly appears at the Central Criminal Court in cases of homicide.

Beyond her criminal practice, Jane has for many years appeared before police disciplinary boards, acting for regulated individuals – and continues this work as a QC. She sits for the FA and Sport resolutions as well as RFU and England Boxing.

In 2021 Jane was appointed to the Safeguarding Appeal Tribunal of the Gymnastics Ethics Foundation.

Defended a mother charged with murder of her severely disabled son. A plea was accepted to Manslaughter by reason of diminished responsibility. The mother developed a mental disorder due to the strain of caring for her son with minimal help during lockdown. The judge said her son was "an indirect victim of interruption to normal life caused by the Covid-19 pandemic." The Defendant was sentenced to a hospital order with restriction under the Mental Health Act without a limit of time. Central Criminal Court.

Defending a French National charged with rape. Offence had allegedly taken place in front of the young children of the defendant and the complainant. Acquitted. Stafford Crown Court.

Prosecution of a youth for the murder by stabbing of his drug dealer. Complicated sentencing exercise due to age of defendant. Central Criminal Court.

Prosecution of a woman for the manslaughter of her baby by shaking. As well as the usual difficult medical issues arising from shaken baby cases, this baby was 15 weeks premature, with attendant health problems. The defendant had an extremely low IQ and required an intermediary for the whole trial. Reading Crown Court.

Prosecution of a man for the murder of his partner. The murder was exceptionally violent and took place in his home address. He suffered for many years from depression and anxiety and ran the defence of manslaughter by reason of diminished responsibility. Central Criminal Court.

Defence of a pharmacist for alleged sexual assaults on the Saturday Girl who worked in his chemist. She was a vulnerable witness, suffering from mental health issues. There was an abuse of process argument over lost/missing CCTV evidence. Defendant acquitted. Northampton Crown Court.

Defence of a man now in his seventies for rape and serious sexual offences against two foster daughters during the eighties and nineties. The case involved analysis of large quantities of social care records which demonstrated significant failings in the recollections and assertions of the witnesses. The complexity of the case was increased as the defendant admitted in police interview to some sexual conduct with one of the complainants but only by consent and when she had reached the age of sixteen. He was jointly charged with his wife who faced child cruelty allegations. The case involved cross examining with some sensitivity extremely damaged adults who had suffered physical and mental health issues as an alleged result of the abuse they complained of. Aylesbury Crown Court

Defence of a man for dangerous act manslaughter and aggravated burglary. In the course of an intrusion at knifepoint into the home of a drug dealer, in order to steal from him drugs/money, the victim escaped by jumping head first from a fourth floor window. He landed on concrete and died. The case involved extensive legal submissions on the law in this area. Central Criminal Court

Defence of a church pastor for the repeated rape and sexual assault of his 11 year old daughter. The witness made timely complaint and was only 12 years when she gave evidence. The case involved full use of vulnerable witness protocol including submission of questions for cross examination in writing. Snaresbrook Crown Court

Prosecution of female defendant for the murder of her sister. This was an astonishingly violent attack in the home address and in the presence of the victim’s four young children. The motive was jealousy as the defendant was having an affair with her sister’s husband. The defendant reported the offence to police and spun a false story of an intruder to the home having attacked her sister. The case involved meticulous investigation forensically, of mobile telephone messages and local CCTV to uncover the truth. The defendant then sought to run mental health defences but eventually pleaded guilty to murder at trial. Central Criminal Court

Prosecution of 5 boys aged 14 and 15 years for the murder by stabbing of another 15 year old boy. The case was a true joint enterprise as the Crown could not prove who the stabber/stabbers were and the case involved piecing together large quantities of circumstantial and CCTV evidence. There were bad character applications re gang membership. St Albans Crown Court.

Defence of young defendant for murder of a 17 year old girl he had just met. He was said to have strangled her during the course of violent sexual activity. He then hid her body in his wardrobe where it decomposed before discovery, making ascertaining the precise cause of death very difficult. Case involved cross examining with great sensitivity and advancing very unattractive arguments to the court robustly yet sensitively. Wolverhampton Crown Court.

Defence of Imam, now in his eighties, for rape and historical sexual offences alleged by 7 cousins. K was suffering from advanced dementia and was found unfit to stand trial so his trial of issue took place alongside the trial of one of his female devotees. It was necessary to cross-examine all the complainants and other witnesses as to bad character without the benefit of proper instructions. Leicester Crown Court.

Defence of a man for rape and serious sexual offences alleged by his teenage step daughter. The complainant had psychological problems and had undergone counselling. There were issues with third party disclosure. There were many prosecution witnesses as all family members had turned against the defendant. Many of these had to be argued out as inadmissible. Croydon Crown Court.

Defence of a man in later life and suffering intellectual impairment for historical sexual offences against a family member. English was not his first language. He was granted an intermediary for the entirety of the trial. This is extremely rare and demonstrated the severity of his difficulties. Examination in chief had to be pre-prepared in writing and legal argument about appropriate directions in summing up such a case. Kingston Crown Court.

Successful defence of university student accused of taking part in the gang rape a woman at a college ball at the Royal Agricultural University. Gloucester Crown Court.

Successful defence, at Warwick Crown Court, of 21-year-old for stabbing his mother's abusive partner through the heart.

Defence of a former headmaster, aged 84 at trial, charged with offences of the utmost seriousness: sexual abuse and breach of trust against many former pupils. Allegations dated to 1959–71. Barely any records existed and there was an extensive abuse of process argument. Previous allegations had been stayed in 2003, but admitted as bad character evidence. Defendant was convicted on retrial after a hung jury at first trial. Extensive argument before the Court of Appeal on the above issues and on sentence.

R v B and others, 2014
Prosecution of four teenagers for kicking to death a young man with mild learning disabilities in a Peterborough underpass. This case involved extensive issues of joint enterprise, where there only one fatal blow. Cambridge Crown Court.
R v CW
Jane defended a vulnerable defendant with autistic spectrum disorder and depression, accused of the murder of his four-year-old daughter. St Albans Crown Court.
R v R, R and others
Jane successfully prosecuted this four-handed murder of an elderly man during a planned robbery at his home. Luton Crown Court.
R v C and others

Successful defence, at Central Criminal Court, of a teenager accused of being part of a gang-related stabbing to death of another teen gang member in east London. Fought off sustained cut-throat defence from another accused.

Other Activities and Interests

"Meticulous, thorough and excellent at preparation." "Organised and very switched-on, she knows how to deal with clients that need careful handling and has a high level of emotional intelligence." (Chambers UK 2021)

Jane is at the top of her game. Her reputation as one of the best silks is well deserved. Jane brings personality and passion for justice to every case which makes her a fantastic advocate but also means clients have trust and confidence in her. Jane is a steely advocate who is prepared to fight for her clients.’ (Legal 500, 2021)

"Jane is a fantastic advocate, who is bright, approachable, realistic and down to earth. She is patient, caring and robust.” “A rising star among barristers specialising in cases of serious sexual misconduct.” (Chambers UK, 2020)

"A hard-working and dedicated silk who is regularly instructed in high-profile criminal cases. She is highly regarded by market sources for her expertise in sexual offences. Interviewees praise her for her handling of sensitive cases and vulnerable clients". (Chambers UK, 2019)

"A fantastic jury advocate with a nice touch breaking down complex arguments." (Legal 500, 2018)

"A hard-working and dedicated silk who is regularly instructed in high-profile criminal cases. She is highly regarded by market sources for her expertise in sexual offences and is noted for being very approachable."

"A tenacious barrister who is great at cross-examination."

"An extremely hard-working advocate who is great with juries."

"Successfully defended a university student accused of gang rape of a female student following a college May Ball at the Royal Agricultural University."

‘Jane is a tough, no-nonsense prosecutor. She’s straight-speaking and good with juries, calm and professional under fire, and gets results.’

"An excellent prosecutor who takes no prisoners. She is calm and persuasive with juries."

Association of Regulatory and Disciplinary Lawyers 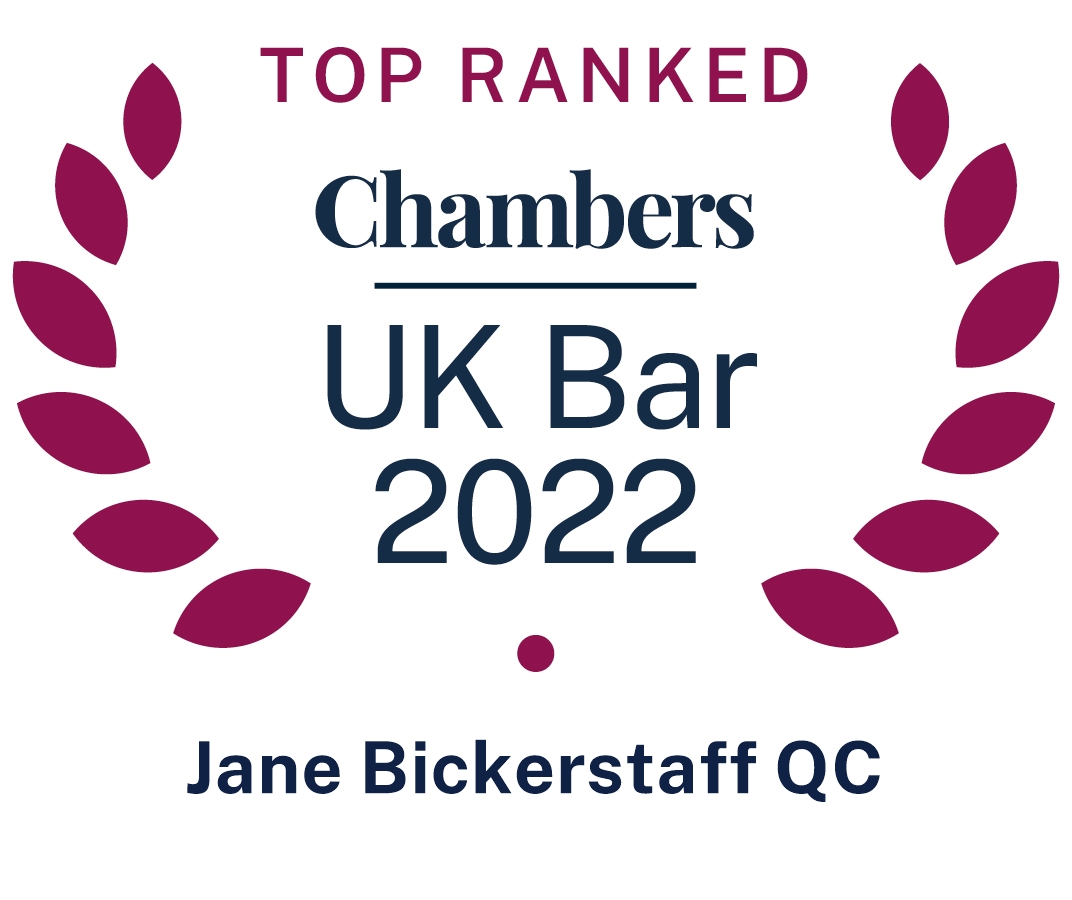