Justin is an exceptionally experienced and committed criminal counsel, with expertise in all types of serious crime, including the representation of those charged with murder, rape and white collar crime. He is also extremely experienced in handling criminal cases attracting major press attention.

Justin has amassed substantial experience over a 35-year career and has been cited as a leading individual in Legal 500 and Chambers UK. He has lectured widely on criminal issues and has advised Parliament on statutory drafting. His practice is now principally defending serious crime and he has been instructed to prosecute and defend persons from a variety of backgrounds - including police officers.

He is a former grade 4 prosecutor instructed in serious crime and complex fraud. He most recently prosecuted the largest trial in the country to be staged under COVID conditions whilst leading Katrina Charles of 9BR against 14 defence counsel, resulting in murder convictions.

His forces background gives him insight when defending in Courts Martial cases. He has represented forces personnel across the UK and in Germany on serious offences including rape and grievous bodily harm with an outstanding success rate. He uses his knowledge of firearms to benefit civilian clients.

Justin can be instructed to appeal a decision to the Court of Appeal, and can advise both orally and in writing upon the prospects for success.

He is authorised to receive instructions directly from the public in private cases.

Prosecuting: Prosecuted a homicide in a psychiatric unit requiring the coordination by counsel of the investigation to ensure that full medical, forensic and psychiatric evidence was collated and adduced in the strongest light. Defendant then changed plea to guilty. Justin was instructed by the CPS.

Defending: The defendant killed his brother following an argument over a will. He admitted the killing to police attending the scene and pleaded guilty. Although there was no psychiatric evidence to support the defendant, it was argued that the Court should accept that there were exceptional circumstances to the case. Resolution of the issues involved a Newton Hearing. The resulting sentence, although favourable, was then appealed. The Court of Appeal accepted the submissions made and the sentence was substantially reduced for the defendant. Justin was instructed by Nick Seeley of Lawtons Solicitors.

Defending: On his way home from a night out, it was alleged that the defendant (a man in middle age of good character) encountered the victim. There was an argument and the defendant went home, armed himself and then returned to the scene to kill the victim. The case involved substantial CCTV analysis, forensic evidence and particularly delicate client management. Birmingham Crown Court. Justin was instructed by Ravi Dev of JD Solicitors.

Defending: Successfully defended a youth accused of the Clapham South station murder. The defendant, who admitted carrying a hunting knife to the scene before giving it to his co-defendant, was acquitted of murder and manslaughter. Central Criminal Court. Justin was instructed by Olukayode Okenla of Simon Bethel & Co Solicitors.

Defending: Defended 2 hunt employees facing criminal accusations made by hunt saboteurs. Submissions on entrapment, self defence, prevention of crime (s.3 CLA), data protection breaches, perverting the course of justice. Prosecution were compelled to make further disclosure resulting in their having to abandon the prosecution. Acquittal. Justin was instructed by Tim Ryan of Warners Solicitors.

Defending: Charges of murder and manslaughter. Successful acquittal of husband who admitted killing his wife by cutting her throat during an argument. Cross-examination of 5 experts. Justin was instructed by Kate Lyon of Taylor Street Solicitors.

Prosecuting: Two men who shot and killed a teenager. Verdicts: both guilty of murder. Made the subject of Channel 4 documentary "Catching A Killer". Justin was instructed by the CPS.

Defending: Allegations of conspiracy to defraud the public – by high-profile limousine company, whose clients include X-Factor stars, royal family and international celebrities. Acting for principal shareholder. Heard at Chester Crown Court. Justin was instructed by Lachlan Nisbet of Brabners Solicitors.

Prosecuting: Instructed to represent the Crown in the Court of Appeal on a murder trial involving the killing of a son in front of his mother. Issues of fresh evidence, errors in the Summing Up and conduct of counsel. All grounds and sentence appeal successfully opposed. Justin was instructed by the CPS.

Defending: Murder trial with aggravated burglary. The defendant, with an organised gang, smashed their way into a home and violently assaulted a couple before going on to kill. Complex DNA, telephone material and identification issues were argued. Heard at Maidstone Crown Court. Justin was instructed by Lorraine Brown of Geoff White Solicitors.

Defending: High-profile allegation of rape against two former military police officers, said to have raped a female colleague in Germany. Legal argument was mounted to exclude a video interview with the complainant, because she had committed suicide and could not be cross-examined. Case also involved jurisdictional issues. Heard at Bulford Court Martial Centre. Justin was instructed by Taylor Street Solicitors.

Defending: Only one of five defendants to be acquitted of gangland murder, arising from a drugs feud and involving numerous guns and the shooting of rival. Issues around firearms expertise, telephone evidence and cut-throat defences. Heard at Sheffield Crown Court. Justin was instructed by Lorraine Brown of Geoff White Solicitors.

"A fine advocate and a very experienced lawyer who has an excellent manner with clients, especially when they are in a distressed state. He goes the extra mile, and gives very speedy responses to any queries raised."(Chambers UK, 2021)

‘A gifted silk who commands respect, with compelling, persuasive and powerful oratory. His advice is without exception carefully considered and to the point, he has the unnerving ability to cut through to the kernel of the case. He is a delight to work with.’ (Legal 500, 2021)

"He is clearly quite formidable in terms of his passion for defending a case, but equally he has that remarkable common touch so that he gets clients straight away and clients get him." (Chambers UK, 2020)

‘Justin is a superb orator. He has a facility with language which makes his speeches to the jury a joy to listen to. There is a freshness to his address to juries which avoids all the tired, worn themes and clichés. He is an excellent lawyer, who bides his time and then pounces. He is very fair and has the complete respect of his fellow barristers and the judiciary. He is a class act.’

"A proactive and effortlessly persuasive barrister who is exceptional to watch when he is in court."

Winner of the Lord Denning Mansfield Cup for mooting 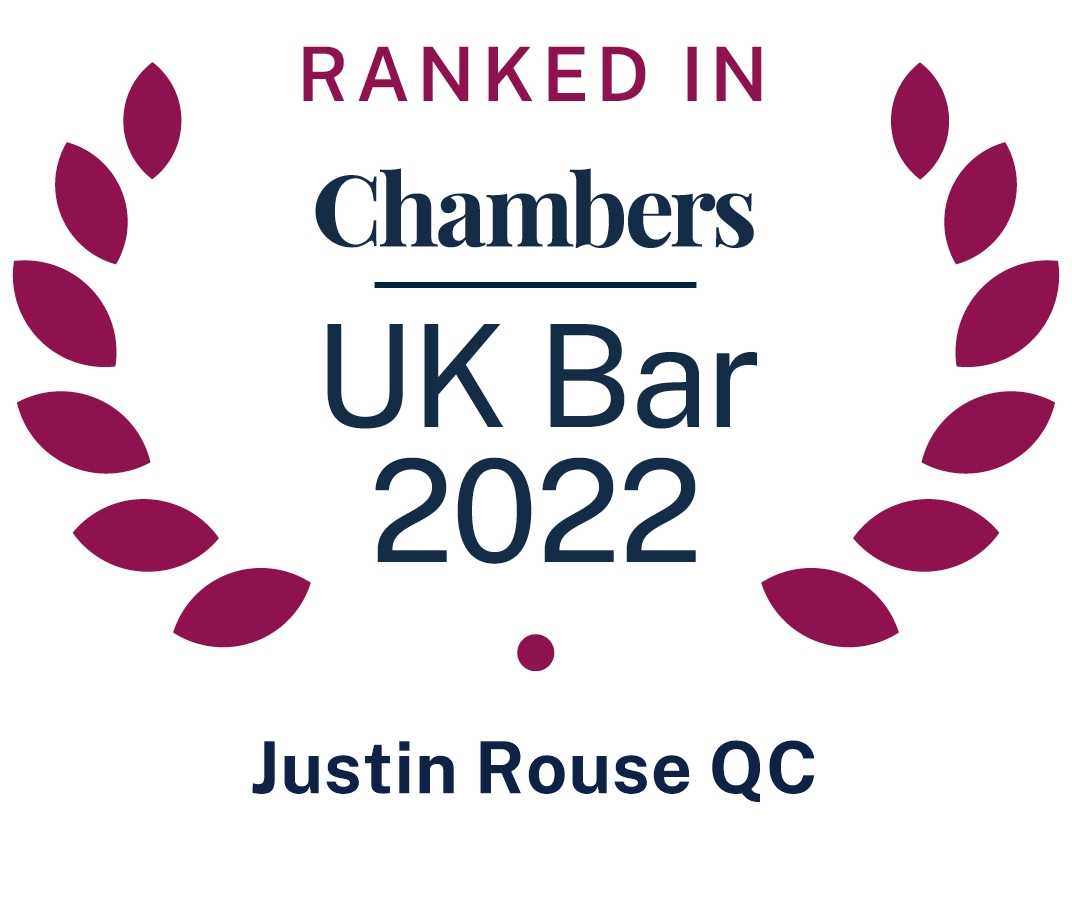