A heavy criminal practice with a predominance of defence work.  In recent years he has concentrated on murder and fraud although he has undertaken cases involving serious sexual crime, drug importations and conspiracies as well as election fraud. He is experienced in conducting high profile cases.

Since taking silk in 1994, he has established a heavyweight criminal practice, mainly in London. He appeared for one of the hijackers in the Stansted hijacking case (Old Bailey) as well as the two-year trial known as the Jubilee Line Extension Fraud (Old Bailey).

He appeared in the High Court of Malawi, instructed by the DPP,  to prosecute the Vice President for Conspiracy to Murder the President as well as Treason by planning to overthrow the Government by murdering members of the Cabinet.

Anthony is also a tenant at 7 Harrington Street Chambers (Liverpool)

Represented one of five defendants charged with murder. Defendants travelled from Southampton to Wakefield to retrieve property from deceased. Leeds Crown Court.

Defended man for strangling his partner and then stabbing her twenty times in heart and neck. Wolverhampton Crown Court.

Client acquitted of Murder of a boy at a Brixton youth club.  Convicted of Manslaughter as alternative. Central Criminal Court.

Defended youth for murder of a drug dealer who had been lured to his girlfriend’s home. St. Albans Crown Court.

Defended a head gamekeeper of a shooting estate in North Wales who was tried for manslaughter by reason of gross negligence. A semi automatic shotgun that was carried in his vehicle went off, killing another gamekeeper seated in the rear. The jury were unable to agree on the first trial. Caernarfon Crown Court.

Defended a young man charged with murder. He was said to be a member of a Manchester gang which hunted down members of a Moss Side gang and attacked them with knives. Serious injuries were sustained and one young man was killed. LM ran the defence of alibi. Manchester Crown Court

Client faced charge of Conspiracy to cause GBH along with several others said to be members of a travellers’ community. A drugs deal with another such group went badly wrong which, late at night, led to an invasion of the second group’s camp where there were many women and children. It was claimed that L and his associates arrived brandishing and firing shotguns. One young man was shot at point blank range. Northampton Crown Court.

A dispute between Liverpool drugs gangs in relation to a substantial importation led to the victim being beaten, extensively tortured over several hours and then murdered. His mutilated body was found in a burnt out car in the city. Convicted of assisting an offender, the client was acquitted of murder and manslaughter. Liverpool Crown Court.

M acquitted of murder after a two week trial following the stabbing of a man on the streets of Manchester. Manchester Crown Court.

Defended a soldier serving in Germany facing four charges of rape of his wife over a two-year period. When giving evidence the lady in question made further claims involving many more allegations of rape, indecent assault and serious domestic violence. The defendant was acquitted of all charges. Bulford Court Martial Centre.

Defended a young man for murder and wounding with intent to cause GBH. He was a member of a Liverpool "county lines" gang and was occupying the house of a couple of users who were encouraged to sell drugs for their own supplies. He was said to have attacked them one afternoon armed with a heavy knife. The deceased received numerous wounds to the back of his head and his back, one or two going straight through his rib cage. The pathologist suggested that these blows must have been inflicted with severe force. The lady received knife wounds to her back as well as the back of her arm. The defendant was acquitted of murder and wounding the lady with intent to cause her GBH. He was convicted of manslaughter as an alternative to murder on the basis of lack of sufficient intent for murder. Preston Crown Court

Appeared for the first defendant in a seven-handed case involving an allegation of ‘reverse people smuggling’. Surprisingly, hundreds of people are smuggled out of the country every month. In this case, the allegation was that T and others arranged for twice weekly batches of individuals to be transported across the Channel. The investigation was conducted in the first place with undercover journalists from the Sun. Isleworth Crown Court.

Represented one of two soldiers facing allegation of raping a female soldier seven years earlier in barracks in Germany. Immediately after the incident both men were told they would not be prosecuted. Years later the complainant committed suicide and, at a subsequent coroner’s hearing, claims were made about the incident which were picked up by the press. Following a newspaper campaign, the new Head of Service Prosecutions instituted a further investigation which led to the re arrest of the soldiers and their trial taking place before a seven-member Board. Both soldiers were acquitted. Bulford Court Martial Centre

Client tried for murder, possession of firearms with intent, possession of class drugs with intent to supply and threats to kill. He was allegedly the leader of a drugs gang in central Sheffield. It was said that he and others armed themselves with shotguns and pistols with the intention of hunting down members of another gang. There followed a shootout late at night in a residential district of the city where a member of the other gang was killed. Sheffield Crown Court.

An unusual and rather horrifying case involving the prolonged torture and murder of a vulnerable teenager, She endured relentless physical abuse at the hands of her family in a household in which the older siblings held sway, the parents living elsewhere. St Albans Crown Court. Client Acquitted of murder.

R v C, 2015
Represented Sicilian Sea Captain who pleaded guilty to having more than twice the legal limit of alcohol in his body when arrested in charge of MV Quercianella, a ship carrying 11,000 tons of petroleum in the Manchester Ship Canal. He received a short suspended prison sentence. Liverpool Crown Court.
R v S, 2014
Client acquitted of attempted murder following an allegation that he and three others set out to execute a rival from another gang. The victim was lured to an open location and, at a given signal, was approached by two men on a fast driven motorbike. They stopped and, at point blank range, one of them fired a gun several times into the man's body. The case was withdrawn from the jury at the conclusion of the prosecution case. Central Criminal Court
R v L, 2014

One of seven youths charged with murder and, after an eight-week trial, the only one to be acquitted. Liverpool Crown Court.

R v W, 2014
W, a German national, was tried in respect of assisting an offender in the commission of murder. Over several weeks he was said to have assisted in building a brick and mortar tomb while preparations were being made for the execution of a French national living in Ellesmere Port and, after his death, in moving the body and shoring up the tomb. He was acquitted while two others were convicted of murder. Chester Crown Court
R v C, 2012
The defendant was acquitted of murder in a case in which the defendant was alleged to have shot a drug gang rival at point blank range on his doorstep. Central Criminal Court.
R v T, 2012
The client was acquitted of murder following a gang's pursuit of a young man after an incident at a party. Central Criminal Court.
DPP of Malawi v Vice President of Malawi
Between 2008 and 2012, instructed by the DPP of Malawi to prosecute the Vice President of Malawi for a conspiracy to murder the President and High Treason by planning to overthrow the Government by murdering members of the cabinet. The trial took place in the High Court of Malawi sitting at Blantyre. Although many months were spent in Malawi in preparation and conduct of the trial the case rather petered out when the judges went on strike and the President died at the beginning of 2012
R v W, 2010
Young woman convicted of manslaughter but acquitted of murder after stabbing boyfriend with ceremonial dagger. Isle of Man.
R v S, 2005-2007

A number of defendants faced allegations of fraud and corruption in what became known as the Jubilee Line Case as it arose out of the construction of the most recent addition to the London Underground system. The case was extremely complex with tens of millions of pages of statements and exhibits. The case was halted after two years and the defendant acquitted on all counts. Central Criminal Court

OTHER ACTIVITIES AND INTERESTS

"A powerful advocate-he is everything juries expect a QC to be. Articulate and a real presence. Juries love him." (Legal 500, 2022)

"Great at getting on with juries, he knows how to build a rapport with them." (Chambers UK, 2021)

‘A very impressive and eloquent trial advocate. His advocacy is first class and he has a wonderful manner with the jury. He is a very commanding presence in court and his ability to distil complex legal and factual issues rapidly, succinctly and persuasively is one of his very best attributes.’ (Legal 500, 2021)

"He has a devastating technique in cross-examination and disarming charm."
(Legal 500, 2017)

Strengths:"A doyen of the Criminal Bar who is loved by solicitors and who is able to charm jurors with his easy style" ... "He works incredibly hard and is really effective in court".
(Chambers UK, 2016)

"Regularly instructed in murder trials ... he is also experienced in fraud and corruption cases".
"He is a really polished performer. He has got many years of experience, and it shows. He gets to his feet and people sit up and listen".
"He is just brilliant at cross-examination and fantastic with clients".
(Chambers UK, 2015)

‘A powerful advocate — he is everything that juries expect a QC to be. Articulate, and a real presence. Juries love him.’

"A classic old-school advocate who knows his stuff backwards."

Member of the Panel of Advocates at the International Criminal Court

Master of the Bench, Gray's Inn

Former member of the General Council of The Bar 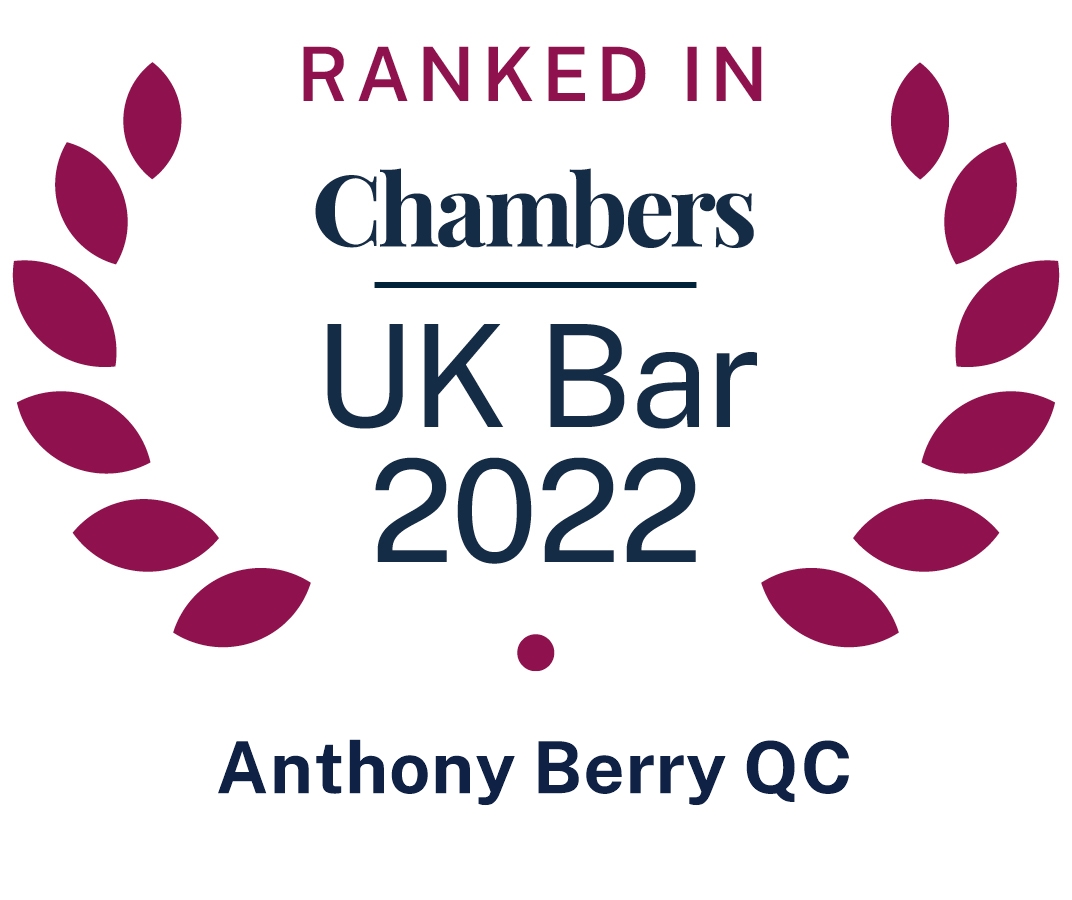