Daniel is a criminal barrister with a formidable reputation, whether he's defending or prosecuting serious offences.

Daniel’s analytical approach to cases, along with his approachable manner, together instil confidence in his clients. He has an engaging courtroom style – and his handling of witnesses, particularly experts or those with vulnerabilities, is exceptional.

Daniel is a Level 4 prosecutor on the CPS General Crime and Serious Crime Panels. He is regularly instructed by the Special Casework Unit, and prosecutes multi-handed cases concerning financial crime, wide-ranging and complex drugs conspiracies, serious violence and sexual offences.

Daniel often appears in cases concerning allegations of serious and complex fraud, money laundering and other financial crimes. The evidence in these cases is often voluminous, but he is able to focus on issues and present evidence and arguments clearly and concisely.

Read more about background and experience

Before coming to the Bar, Daniel worked for a large financial organisation, developing guidelines for investment funds and operating compliance programmes. This gives him an insight into how such organisations work.

Daniel undertakes appeal work, often when instructed by people who have been represented by others at first instance. In the Court of Appeal, his success has resulted in convictions being quashed, and sentences reduced.

Although Daniel is most often engaged in serious and complex cases in the Crown Court, he understands the importance of every allegation to the client – and that has brought him considerable success in allegations of road traffic offences. These allegations are often a client’s only experience of the court system, so it is vital that they have someone who understands their needs and can present their case in the best way.

Junior alone representing a defendant in an ongoing seven week long complex drug, firearms and money laundering trial. Daniel’s defendant is accused of laundering over £1m cash in a safe in her own home, on behalf of the first defendant, during the Indictment period. The case has required a detailed analysis of the content of telephone messages between the defendant and others, EncroChat material, surveillance and visual footage. Bristol Crown Court.

Led junior in the successful defence at a re-trial of a defendant accused of attempted murder following the alleged revenge attack for an earlier murder. The case attracted media interest as a member of the defendant’s group shot and killed himself when hitting a sawn-off shotgun against a vehicle. Daniel and his leader did not represent the defendant at the original trial, in which the defendant was convicted of certain offences, which undermined the then defence of non-presence. The jury were informed of that during the re-trial, and therefore the presentation of the defence case required considerable tactical decision-making. Woolwich Crown Court.

Junior alone representing a defendant in a six week long, serious organised drugs conspiracy. Daniel’s defendant, the youngest in the conspiracy, claimed that he was a victim of Modern Slavery, which required a careful and detailed presentation of this defence, hampered by the absence of a positive conclusive grounds decision from the Single Competent Authority and in the face of significant documentary and prison intercept evidence. Maidstone Crown Court.

Junior alone representing a defendant in an eight week long, large-scale County Lines conspiracy. Following a detailed analysis of thousands of pages of telephone and other evidence, and extensive cross-examination of the Crown’s drugs and cell-site experts, Daniel’s defendant was acquitted. Snaresbrook Crown Court.

Led junior in a successful prosecution of 12 defendants for the kidnapping and false imprisonment of a victim, who was taken to a number of different addresses during the course of the lengthy incident.

Successful prosecution as junior alone, of a police officer who defrauded the Metropolitan Police Service of over £100k, through the submission of forged/altered medical certificates. The Defence were relying upon the Defendant genuinely suffering from a condition known as Fibromyalgia, and therefore wasn’t dishonest. Daniel had to cross-examine an expert rheumatologist in respect of this, and also clearly presented various strands of evidence to demonstrate that the Defendant was working actively in order to rebut Defence suggestions of immobility. Southwark Crown Court.

Led junior in a five week long, highly sensitive and complex, prosecution trial of the rarely prosecuted offence of conspiracy to procure a miscarriage through the administration of a drug, before a High Court Judge. Complex legal issues had to be determined, such as the legal definition of ‘miscarriage’, and whether the mother was a ‘victim’ and therefore could not be a party to the conspiracy. St Albans Crown Court.

Led junior in a successful prosecution of over 20 defendants in an undercover Class A drug dealing operation, over a series of four trials, which  was instigated following national media interest after members of the local community had sought to combat the issue. Snaresbrook Crown Court.

Led junior in high profile six week trial involving the double attempted murder of wife, and endangerment of children, by means of (a) tampering with the domestic gas supply, and (b) tampering with the wife’s parachute. Daniel had to undertake detailed and extensive cross examination of experts in gas fittings and tool-marks. Winchester Crown Court

Successfully defended in trial involving allegations that the Defendant had carried out serious sexual offences against the younger sister of his (ex) partner. Daniel had to deal with extensive evidence against the defendant, which came from various witnesses of fact as well as electronic evidence, and he was praised by the Judge for his sensitive handling of the case. St Albans Crown Court

Two week prosecution of defendant accused of an offence of causing grievous bodily harm with intent, on the basis that a police officer’s leg was broken when it was alleged that the defendant was resisting arrest. Complex legal argument was engaged relating to issues which included the legality of arrest, causation, and recklessness. St Albans Crown Court.

Prosecuted, as junior alone, two defendants accused of attempted murder of a victim who was seeking to assist with the removal of one of the defendant’s possessions from a flat. He was struck over the head with a bottle and stabbed a number of times. St Albans Crown Court.

Successful prosecution of a serving police officer sexually assaulting a female colleague whilst on duty.

Represented an alleged conspirator in a multi-handed £2.5 million international investment fraud. Following a four-week trial, DM was acquitted of the main allegation.

Junior to Abbas Lakha QC represented the defendant, who, along with others, was accused of conspiring to commit breaches of immigration law following an investigation by BBC Panorama. This involved over 800 foreign students, where visas to remain in the UK to study were fraudulently applied for. This was done through the obtaining of falsified educational qualifications and bank documents, and, in particular, through the use of fake or proxy sitters who would take English speaking exams on behalf of the students.

OTHER ACTIVITIES AND INTERESTS

"Daniel Higgins is an extremely impressive junior. He looks at cases from all angles and leaves the client feeling that they have had a first-class service. He gives his instructing solicitor confidence when leaving the client in his hands." (Chambers UK 2021)

"Incisive in his cross-examination and fearless in his approach to judges" (Legal 500, 2020)

“He is clever, insightful and straight-talking, and an effective advocate." (Chambers UK 2020)

‘Daniel has been a revelation, recent cases in which he has been instructed have proved again and again what an effective advocate he is, persuasive before a Jury with a lightness of touch which enamours him to all, client feedback is hugely positive and all grateful to the care he takes with the client and their cases.’

"He impresses with his laid-back charm and ability to stay calm under pressure." 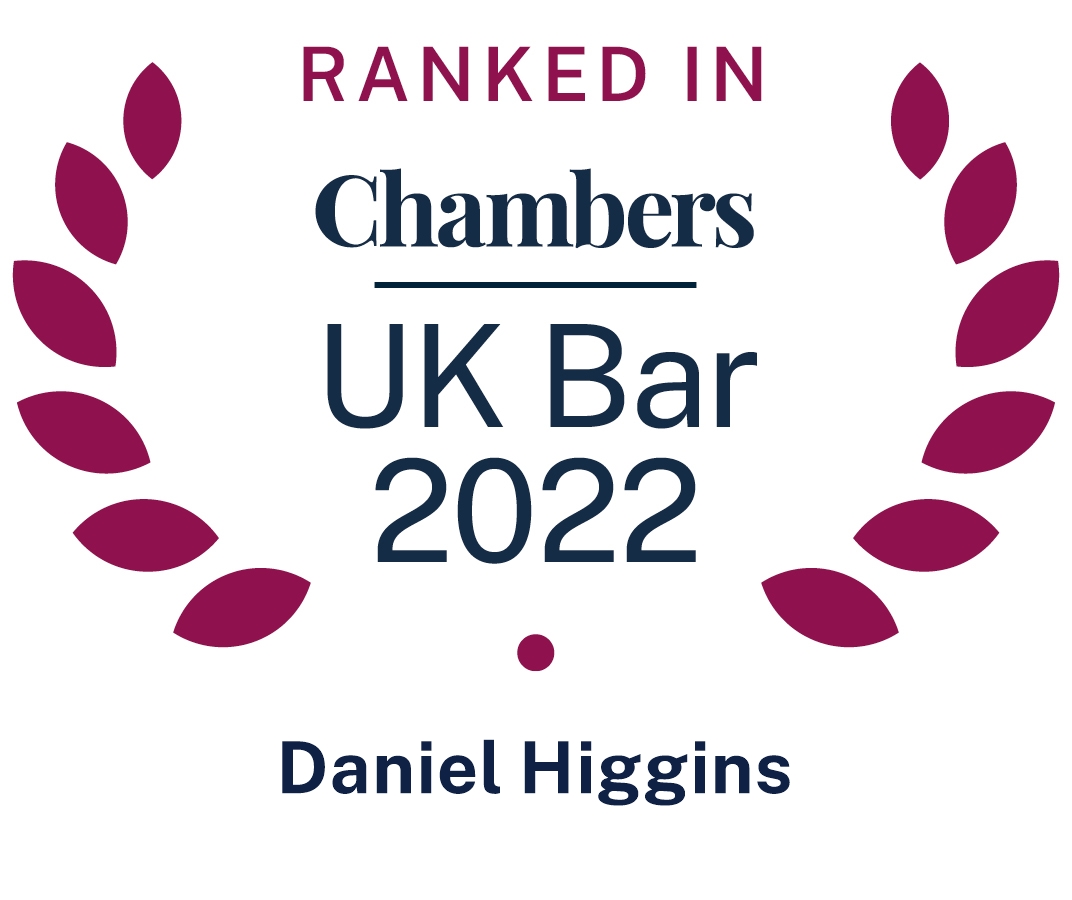