Jonathan is a specialist extradition barrister, who appears in the Legal500 and Chambers and Partners for his work in this area. He has developed a busy practice in this specialist area. He regularly appears at Westminster Magistrates’ Court and on appeal at the High Court, and he represents both Requested Persons and Judicial Authorities.

He also undertakes work for the GLD as part of the Attorney General’s civil panel, including advising in unlawful detention.

Jonathan is currently at Grade 3 on the CPS extradition panel, Grade 2 on the CPS prosecution advocate panel for general criminal work, and a member of the Attorney General's list of civil panel counsel (C panel).

Jonathan spent 18 months in the Extradition Unit at the CPS where he gained considerable expertise in extradition proceedings. Since then, he has quickly developed a busy practice, both prosecuting and defending extradition cases. He has been involved in a number of leading cases, including appearing in the Supreme Court. The Legal500 recommends Jonathan, stating "Formerly of the CPS, he is creative and innovative with his defence briefs".

In addition, Jonathan has considerable experience of mutual legal assistance, including the European Investigation Order.

Before moving to chambers, Jonathan was a Senior Crown Prosecutor for the CPS where his diligent preparation and robust advocacy meant that he was instructed to act in difficult and serious cases. He gained extensive experience in all types of cases in the Magistrates’ and Youth courts, encompassing work from theft to sexual offences. Since moving to chambers, he has been instructed in a range of cases, both prosecuting and defending. He has also been instructed by various local authorities.

Led by Helen Malcolm Q.C. for the Appellant. The Appellant argued that the conduct in the warrant did not meet the requirements of dual criminality, and that the decision in R v Rogers [2014] EWCA Crim 1680 on the extraterritorial nature of money laundering offences was a matter needed further examination by the Supreme Court.

Acting for the Respondent. The Court considered whether extradition was disproportionate in the circumstances, and addressed the impact of Brexit, the factors to be considered under the proportionality exercise, and the status of the appellant’s evidence of the circumstances of the offences.

Led by Jonathan Hall for the Respondent. ‘Leading’ case before the Divisional Court in respect of Latvian prison conditions and whether they placed extraditees at a real risk of a violation of Article 3ECHR

Acting as junior counsel for the Respondent. The first case to have been referred from the English courts to the CJEU in extradition proceedings. The issue referred relates whether a public prosecutor can be an issuing authority in circumstances where a Court has no oversight of the domestic arrest warrant or EAW prior to surrender. The referral is currently pending.

Led by John Hardy Q.C. for the Respondent. The Supreme Court considered whether an individual who has been convicted, but where the conviction is not final because he has an unequivocal right to a retrial after surrender, is "accused" pursuant to s.14(a) of the Extradition Act 2003 or "unlawfully at large" pursuant to s.14(b) for the purposes of considering the "passage of time" bar to surrender.

Led by Mark Summers QC for Mr Balasz. The Appellants argued that their extradition would amount to a real risk of a breach of their Article 3 Convention rights due to the prison conditions in Hungary.

The requested person had previously been the subject of extradition proceedings from Greece for the same matters, and had her sentence transferred to Greece where it had been served in full. The warrant was discharged on grounds of Article 8, double jeopardy and abuse of process.

Representing the Appellant in a successful appeal against the order for extradition on the grounds of proportionality. The Court held that, for the purposes of the Extradition Act 2003 s.21A, the requesting judicial authority bore the burden of detailing the seriousness of the extradition offence and what the likely penalty would be. In this case, they had not done so and so the appellant should be discharged.

Led by Julian Knowles QC for the Respondent. The Divisional Court considered the powers of the court to admit fresh evidence of the respondent on appeal which was relied upon to uphold the decision of the district judge, and concluded that it could do so in the interests of justice. The Court also rejected the arguments of the appellant that the District Judge had erred in his conclusions in respect of sections 2, 10, 14 and 21 of the Act. The appeal was dismissed.

Acting for the Respondent judicial authority. The Court held that a distinction could be drawn between a requested person trying to undermine a warrant by adducing evidence, and the district judge taking into account his evidence for the purposes of establishing dual criminality. The decision of the District Judge was therefore a proper one, and the appeal was dismissed.

Appearing for the Respondent judicial authority as a lone junior before the Divisional Court. The Court upheld the decision of the district judge to order the extradition of the Requested Person.

‘He has a thorough knowledge of extradition law and practice. Mr Swain prepares clear and structured skeleton arguments and advices. I am frequently impressed by his ability to articulate these arguments orally in court. He is very persuasive and knowledgeable. He is a thorough and authoritative advocate.’ (legal 500, 2021)

"A brilliant advocate and tactician. Jonathan is always a pleasure to work with and a rising star among the Extradition Bar." "He is an able, clever advocate with very good knowledge of the law, who is both fair in his handling of prosecution work and very passionate when defending." Chambers UK, 2020

"He is good on the technical detail, he doesn't take bad points, and he always adopts a sensible view of cases." Chambers UK, 2020

"A staunch advocate who is very knowledgeable on extradition matters" Legal 500, 2020

‘Jonathan is a very able junior barrister. He achieves some fantastic results and he always has his finger on the pulse.’

"He is very impressive when it comes to thinking outside the box and looking at issues from different angles."

LLB in Law and Criminology, University of Sheffield (2008) 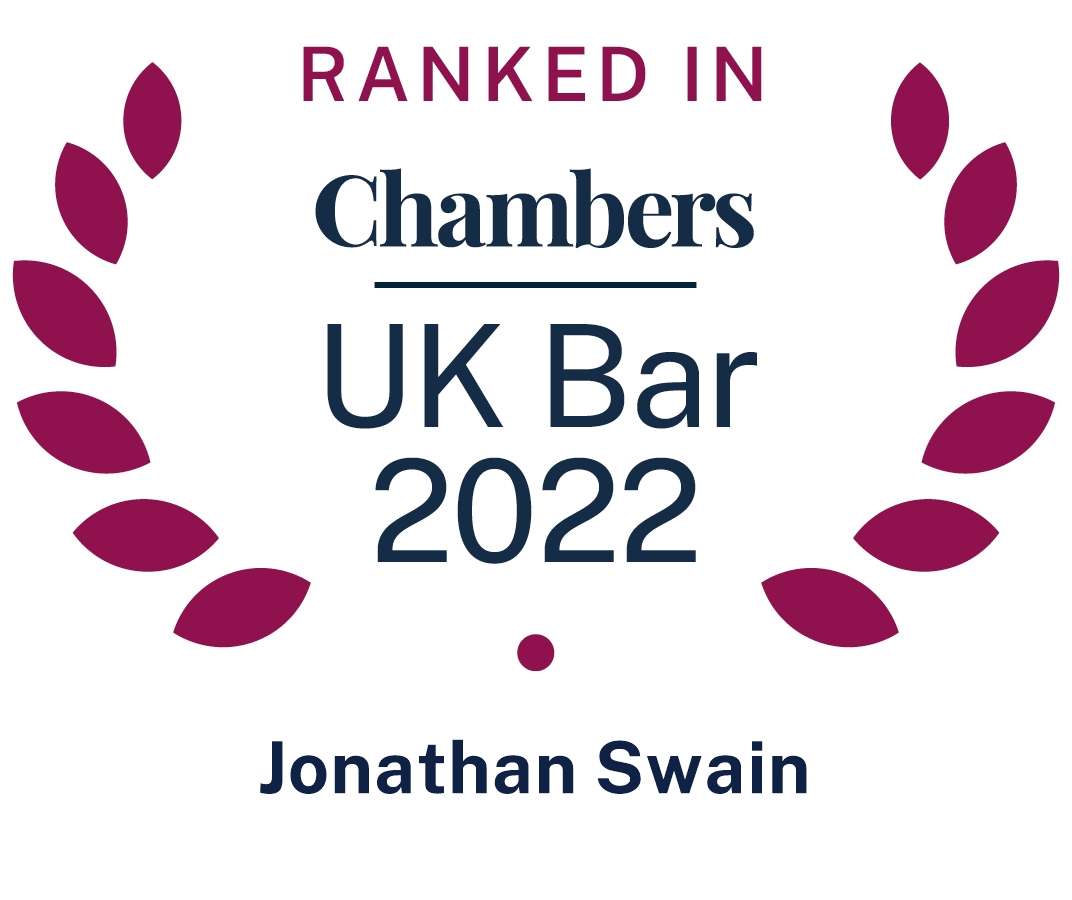