Specialising in criminal and regulatory law, Max is a persuasive and experienced advocate who is dauntless in pursuit of a successful outcome for clients.

He is ready to advise at any time, in person or in writing, on cases great or small, whether privately funded or legally aided.

Max has been a tenant at 9BR since 2007. He maintains a mixed practice, defending and prosecuting a range of criminal offences. Having appeared in hundreds of trials, he has learnt from long experience the hard work and preparation that is required to win in court.

In 2018 he was seconded to CPS London in the Homicide Unit assuming responsibility for murder and fatal road traffic prosecutions, Max has a busy homicide practice including trials at the Central Criminal Court.

In 2015 he undertook a secondment with the Nursing & Midwifery Council presenting cases, providing advice and progressing investigations.

In 2014 he spent six months on secondment to the Financial Conduct Authority working on Operation Dovercourt, the multinational investigation into foreign exchange manipulation. Max has acquired an in-depth knowledge of this area of financial services.

In 2010 he was seconded to the fraud prosecution division of the CPS as a senior crown prosecutor. He assumed a serious and heavy caseload – providing pre-charge advice to investigators, making charging decisions, and drafting letters of request for international assistance.

Max also has plenty of experience of defending young people or vulnerable clients – including people battling addictions – and is sensitive to their needs. He has defended immigration and identify offences and has an interest in art crime, having worked at Sotheby’s before coming to the Bar.

Prosecuted a shooting in Luton in which the defendant was convicted of grievous bodily harm with intent during the course of a violent disorder. Luton Crown Court. News story here

Prosecuted a shooting in which a 16 year old boy was found in a street in Borehamwood paralysed from a gunshot wound to his neck. The defendant was convicted of possession of a firearm with intent to endanger life. St Albans Crown Court. News Story here

Prosecuted a conwoman who posed as a carer to Sir Samuel Brittan, brother of the late Lord Brittan, former Home Secretary. She defrauded him of over £100,000. Southwark Crown Court.

Drugs related shooting incident in Luton. Defendants, both represented by Silks, indicted with conspiracy to murder and resulted in conspiracy to cause s.18 convictions. Luton Crown Court.

Prosecution of 5 boys aged 14 and 15 years for the murder by stabbing of another 15 year old boy. The case was a true joint enterprise as the Crown could not prove who the stabber/stabbers were and the case involved piecing together large quantities of circumstantial and CCTV evidence. There were bad character applications re gang membership. Led by Jane Bickerstaff QC. St Albans Crown Court.

Prosecuted a BMW driver who drove deliberately into the path of a moped rider. Convicted of s.18 GBH. St Albans Crown Court

Prosecuted arson and perverting the course of justice arising from the torching of a car used to commit a murder in Battersea. To date no convictions have been obtained for the murderers partly due to the destruction of the getaway vehicle. Central Criminal Court.

Prosecuted woman who inveigled her way into the life of Sir Samuel Brittan and defrauded him of approximately £100,000. Southwark Crown Court.

Operation Baum: six-handed case of violent disorder which had resulted in the death of a man. Led by John Cammegh at Croydon Crown Court. .

Max defended in one of the last ever careless driving simpliciter prosecutions causing death. Case stopped at half-time.

R v H and others

Burglary and dangerous driving case: Max defended a man accused of a smash and grab of Woolworths culminating in a high-speed chase. Drug addiction was the motive. See Hertfordshire Mercury.

Max prosecuted a man who, in an unusual manner, sexually assaulted a sleeping woman on a train. See news story.

Max prosecuted a man at St Albans Crown Court who incurred huge police expenditure – including deployment of a police helicopter – when he rang 999 threatening to shoot himself in the head. See St Albans Review.

Max was led by Jane Bickerstaff in the prosecution of a man subsequently convicted of sexual offences of the utmost gravity perpetrated on his own family.

Max defended a man who pleaded guilty at Southwark Crown Court to burgling high-value properties and stealing fireplaces worth thousands of pounds.

At Kingston Crown Court, Max successfully prosecuted two men for staging a robbery and emptying a branch of Carphone Warehouse of all its stock, in a so-called “inside job".

Max defended a young man who was tried at Cambridge Crown Court for allegedly robbing a vulnerable and almost blind man in his own home. A ‘Goodyear’ indication was sought at the start of the trial but the client went on to be unanimously acquitted.

R v W and others

Section 20 GBH: Max prosecuted a GBH trial at Guildford Crown Court, where the victim’s eye socket was shattered and a metal plate was inserted. Witness gathering was impeded by many potential witnesses being in fear.

Max defended a man serious mental health problems who had been on the run for two years, having been convicted of using a false passport to open a bank account. Max has a good working knowledge of the Mental Health Act and has argued fitness to plead and fitness to be tried.

R v P and others

Conspiracy to defraud; Operation Danks Corner. Max was led by Paul Watson QC in the prosecution of a counter-terrorism officer who was convicted following trial of defrauding the Metropolitan Police of over £90,000. See Daily Mail article.

R v A-S and others

Conspiracy to defraud and to contravene trademarks (Operation Donets). Max was the disclosure junior for the Crown in an eight-handed case at Southwark Crown Court which culminated in a number of convictions in July 2009. See BBC story.

NHS fraud: Max prosecuted a woman who grossly abused her position as an NHS manager by falsifying invoices and spending £200,000 on her stud farm. See Daily Mail article

Boiler room fraud: Max was led in the prosecution of two young men who worked in a boiler room operating out of Madrid defrauding victims of hundreds of thousands of pounds. See Sky News story.

Acting for a Company appealing against a decision to disallow a VAT reclaim on the grounds of constructive knowledge fraud. Lead by Abbas Lakha QC.

Acting for a Company appealing against a decision to disallow a VAT reclaim on the grounds of constructive knowledge fraud. Lead by Abbas Lakha QC.

Poland v L, 2006
2006 EWHC 3227 (Admin) Max represented the requested person at first instance for his contested extradition hearing, arguing that it would be unjust and oppressive for him to be extradited to Poland to face trial for offences of fraud many years after their alleged commission. The same argument was advanced in the Divisional Court; the appeal succeeded.
United States of America v H

Max represented Abu Hamza in a sequence of remand hearings in the run-up to his contested extradition proceedings at City of Westminster Magistrates’ Court – and assisted in drafting advice concerning the instruction of an expert to comment on the possible use in the US of evidence obtained by torture or oppressive treatment. See BBC news story.

Keeffe (Robert), 2008
Court of Appeal (Criminal Division) [2008] EWCA Crim 1768 Appeal against sentence in a case of handling stolen goods – where an immediate sentence of imprisonment was imposed following trial without the assistance of a pre-sentence report, and where the defendant had recently completed a community order and the value of the goods in question was very low.
Thomson (Claire), 2009
[2009] EWCA Crim 1148 Appeal against sentence in a group kidnap near Luton in which a young woman was frogmarched from a train station and extensively beaten in woodland at night. The sentence was almost halved by the Court of Appeal. See BBC news story.
Gray (Claire), 2009
Appeal against conviction in a drugs prosecution in which Miss Gray was convicted of being in possession of the drugs in factual circumstances, where such a finding by the jury was a result of a misdirection by the trial judge.

Other activities and interests

"A calm, measured and impressive advocate who leads from the front and does a fantastic job." (Chambers UK, 2021)

'Max is an extremely impressive trial advocate. He is very hard working and diligent. He is a very able and stylish advocate with a very persuasive manner. One of his best attributes is his ability to rapidly assimilate complex legal and factual issues, and to then address the Court on these issues succinctly and persuasively. He has very good case management and is highly organised.' (Legal 500, 2021)

"He is willing to go the extra mile to ensure the case is prepared to a high standard and has a calm unflappable manner. He gains the respect of clients and judges alike" (Chambers UK, 2020)

"An enterprising defender and also a highly-respected prosecutor" (Legal 500, 2020)

"He has an exemplary court manner, is wise beyond his years and is particularly good at dealing with young defendants." (Legal 500, 2017)

‘Max is a skilful and able trial advocate. He puts forward his case in an attractive way to both judge and jury. His cross examination is careful and focused on the real issues in the case. He marshals his material well in what was a difficult, complex and document-heavy cases, an area where he is clearly an advocate with real ability.’

"An accomplished and professional barrister who deals with both prosecution and defence work. He is smooth in court, competent when addressing a judge on matters of the law and someone who prepares his cases fully." 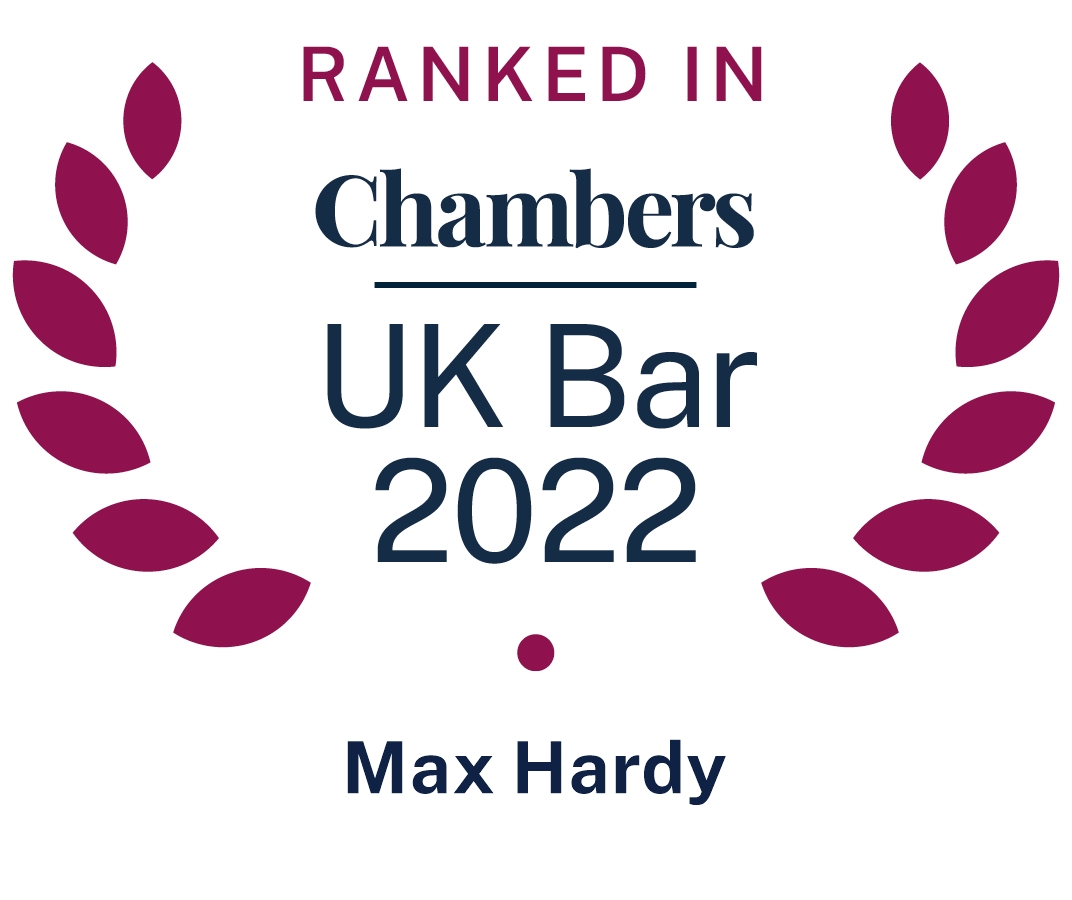