Sean is an experienced, calm and focused barrister who both prosecutes and defends allegations of serious crime. He prepares his cases with great care, gives insightful advice and is a convincing jury advocate.

Defending the alleged hitman in an 11 week, eight defendant murder trial involving the killing of an innocent bystander after a drive-by shooting. Led by Peter Glenser QC. Preston Crown Court.

Defending an allegation of causing death by careless driving.

Allegation of attempted murder. Sean prosecuted a son who set fire to his disabled mother after dousing her in white spirit. Eventually pleaded as a s.18 GBH and arson with intent. Assisted Judge with detailed sentencing note that resulted in defendant being found to be dangerous and receiving a 21 year sentence.

Defending an allegation of attempted murder. The complainant was stabbed seven times to the chest and identified his lodger, the defendant, as his attacker. Sean challenged the complainant’s credibility and asserted his identification was wrong. The defendant was acquitted.

8 defendants aged between 14-16 accused of attempted murder and wounding with intent in two knife attacks in East London. Acting as prosecution junior during five week trial. Dealt with bad character applications and two day sentencing hearing - both complicated by the age of the defendants all of whom were convicted.

Defending an attempted murder allegation deriving from a group knife attack in a night club. Sean ran a series of legal arguments as to the admissibility of forensic and medical evidence that ensured that in due course the prosecution offered no evidence on the attempted murder and accepted a plea to ABH with the defendant receiving a non-custodial sentence.

Charged with murder, Smith was the only one of five defendants to be acquitted after a five-week trial. Sean’s cross-examination of the prosecution’s cell site expert helped undermine the prosecution's case. Earlier, in the Divisional Court, Sean had successfully challenged a decision to refuse bail. Led by Justin Rouse QC.

Prosecuting a trial where the defendant was charged with the illegal import and export of critically endangered European eels. Sean, led by Peter Glenser QC, was instructed by the CPS Specialist Fraud Division after an investigation conducted by the National Crime Agency. European eels are considered so endangered that they are subject to the Convention on International Trade in Endangered Species (CITES) and there is a strict prohibition on exporting them to outside of the European Union. The offences spanned a two year period and involved 16 prohibited exports consisting of over 5 million elvers with an eventual retail value in the Far East of over £53 million. The defendant was found guilty of all offences. Southwark Crown Court.

Sean worked as part of a team of barristers, assisting a leading global bank with its regulatory obligations. He worked directly with bankers and executives to help them meet standards in relation to “know your client” and anti-money laundering requirements. During the project Sean worked from London, Geneva and Monte Carlo.

Sean successfully prosecuted a defendant responsible for the illegal importation of rare bird eggs into the UK in contravention of smuggling the Control of Trade in Endangered Species (Enforcement) Regulations 1997 (CITES).

Defending a man accused of multiple rapes, people trafficking and conspiracy to cause prostitution due to be tried over four weeks at Birmingham Crown Court in 2022.

Defending a man accused of rape and attempted rape of the same complainant after supplying the complainant with drugs. The defendant was found to be Not Guilty on both counts.

Defending a young man accused of rape where a co-defendant was running a cut-throat defence. Sean persuaded the prosecution that the evidence was such that it was appropriate that they should offer no evidence against his client resulting in a not guilty verdict.

Sean represented a delivery driver accused of picking up a vulnerable child and raping her after a day of driving her around. He was also charged with a modern slavery offence in relation to transporting her. The trial involved careful cross-examination of a vulnerable and young witness. The defendant was acquitted of modern slavery and convicted of rape. Birmingham Crown Court.

Sean defended a university student accused of rape whose DNA was found on a swab of the higher vagina. The defendant insisted he had never penetrated the complainant. Sean challenged the forensic evidence and suggested a risk of contamination due to not following the correct procedure. The defendant was acquitted.

Defending a businessman accused of tying up complainant, holding him hostage, beating him and threatening to kill him. The complainant was discovered bound and bloodied by police. The defence was that he had agreed to be tied up and had set the defendant up. Advancing that defence involved a full on attack on the defendant’s character in cross-examination over three days. Defendant was acquitted on all counts. Manchester Crown Court.

R v MDK and others, (ongoing)

Prosecuting over twenty defendants who are alleged to be part of an organised crime group involved in the supply of drugs, the possession of firearms with an intent to endanger life and an attack on the police in an attempt to regain drugs and firearms previously seized. The defendants will be tried across four trials taking place over five months at Birmingham Crown Court in 2022. Led by Peter Glenser QC.

Sean defended a young man accused of being concerned in a massive conspiracy to supply cocaine. After carefully analysing the evidence Sean was able to persuade the prosecution that they had mistakenly identified the defendant as part of the conspiracy when he was in fact a low level supplier of cannabis working alone. A potential sentence of many years was avoided and the defendant received a suspended sentence.

"His easy-going manner belies the quality of his advocacy, both oral and written." (Legal 500, 2017)

‘Sean belies his quiet ways with a determination to achieve the best result possible. Much admired and respected by lay clients and solicitors alike. A polished performer who gives everything to a case and succeeds where many would fail. A pleasure to work with, I would unhesitatingly recommend him as a class act.’

"Takes a mature approach and offers a realistic appraisal of the merits of the case."

Accredited to deal with vulnerable witnesses 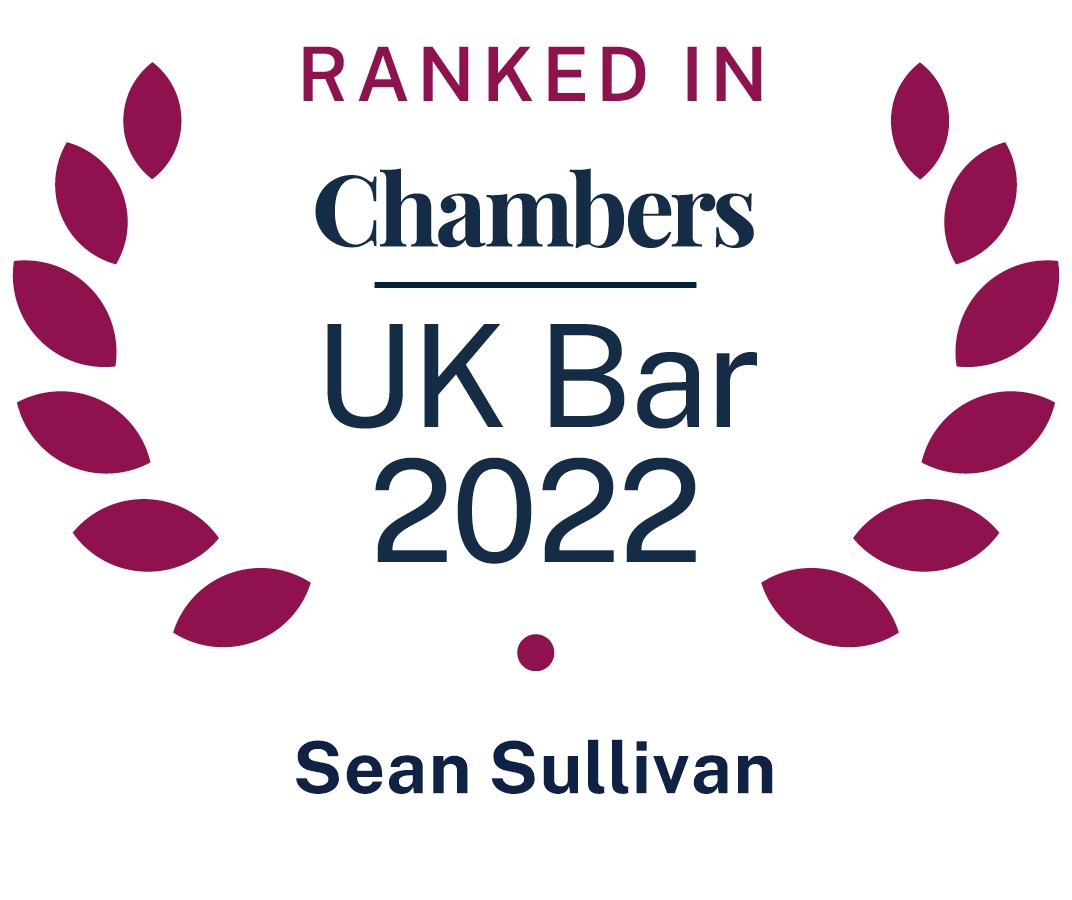