She has represented clients in high-profile and complex cases before international and regional courts and tribunals, resulting in landmark decisions which have developed international law.

Sarah provides direct advice to individual clients, as well as governmental and non-governmental actors, on implementing international law and standards.

Sarah provides tailored advice and representation to clients across various stages of investigation and judicial proceedings.

She has been instructed to provide consultation to governments and NGOs in Europe, the Middle East and Central America on implementing international criminal law and public international law.

Sarah has also assisted clients in challenging Interpol Red Notices, as well as submissions regarding the delisting of individuals from various sanction regimes – including proceedings before the General Court of the EU.

She has also appeared in criminal proceedings before the courts of England and Wales – and advises on judicial review proceedings, extradition proceedings and immigration cases.

Sarah is fluent in Arabic and can provide advice in either English or Arabic.

Sarah is assisting in the representation of Mr. Anselme Nzabonimpa in relation to contempt proceeding currently before the Mechanism. The allegations stem from the review proceedings in Prosecutor v. Augustin Ngirabatware, who was convicted for genocide before the International Criminal Tribunal for Rwanda. A summary of the case can be found here.

Special Tribunal for Lebanon Sarah appears as co-counsel representing the interests of Assad Hassan Sabra in international terrorism proceedings related to the death of former Prime Minister of Lebanon, Rafik Hariri, in 2005. See summary on the tribunal website.

International Criminal Court (ICC) Sarah assisted in the representation of Gaddafi during admissibility proceedings before the ICC. Gaddafi is charged with murder and persecution, as crimes against humanity alleged to have been committed during the Libyan conflict in 2011.

Advising the Ministry of Human Rights in the Republic of Yemen and Yemen Center for Transitional Justice.

Other Activities and Interests

"A brilliant opponent, who makes all the right arguments in difficult cases. She doesn't hold back and never pulls her punches." "Sarah is incredibly hard-working, incisive and someone with a great strategic mind." (Chambers UK, 2021)

‘Sarah is an excellent, diligent and dynamic lawyer who has been fantastic to work with. She drafts extremely well, is very organised and able to manage and prioritise between different tasks and works very well as part of an international team based in various different locations. She also is a strong advocate, clear, concise and persuasive in her submissions.’ (Legal 500, 2021)

"An extraordinary lawyer with impressive analytical and strategic skills, who has an in-depth knowledge of international criminal law and procedure." "Her legal prowess is complemented by her particular insight into political situations in different countries. She will work tirelessly and skilfully to ensure a fair outcome for her client." "Sarah is an excellent, diligent and dynamic lawyer who drafts extremely well and is able to manage and prioritise different tasks." (Chambers UK, 2020)

'Her reputation proceeds her. She is a creative advocate on her feet and on the papers' (Legal 500, 2018)

"...respected barrister with experience of handling international criminal before the Special Tribunal for Lebanon and for her specialism in cases stemming from the Libyan conflict."

"A formidable lawyer with a razor-sharp legal mind. She is incredibly well-organised and has a great deal of experience and understanding of international criminal law."

"Acted for one of four defendants tried in absentia for the assassination of the former Prime Minister of Lebanon, Rafik Hariri, and 21 others on 14 February 2005." (Chambers UK, 2018).

"She is a sound choice for even the most difficult of cases." (Chambers UK, 2017)

"Up-and-coming lawyer noted for her involvement in ICC proceedings, who recently defended one of the individuals who had been charged before the Lebanon tribunal with killing the country’s former prime minister. She also has substantial experience of advising the British Foreign and Commonwealth Office on human rights matters."

"She is extremely bright and speaks Arabic, which is an advantage in this field."

"A stalwart of the International Criminal Bar who is highly respected by everyone who works with her. Her knowledge of international criminal law is among the very best in the field." 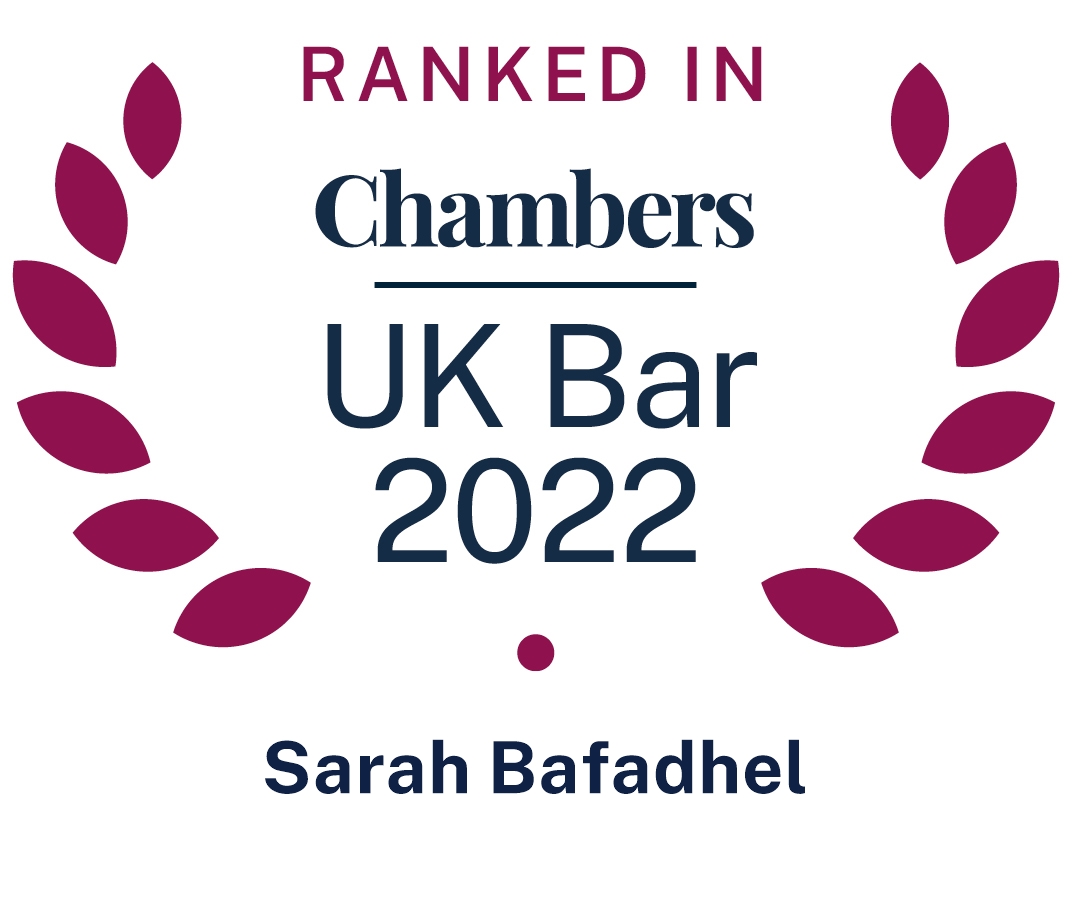